One of my research sources, the Toronto Bata Shoe Museum, has an online exhibition at the moment that includes a wonderful assortment of men’s footwear, including one or two from the period I’m studing, the mid 17th century. One shoe I particulary like is the young man’s pump here:

The costume that accompanied this shoe would have looked something like the below right. The courtier in blue and the lady alongside show typical costumes from the court of Louis XIII.

Peasants of this period would not have owned the satins and lace that you see in the illustration. They did, however, copy the style of those in the upper class, especially in terms of neckline, hem and sleeve length, trouser volume, and the layering of sleeves. Both men and women tended to have openings in the sleeve from which you plucked your blouse — to reveal its detailing (if it was a very fine example) or to demonstrate the expertise of your tailor.  High ranking folks had their clothing detailed with jewels and ribbons. See all the lace on monsieur the noble? That was a real fancy of gentlemen from the French court, as were ribbons. Such fancies were forbidden, however, on the working classes. See the samples below: 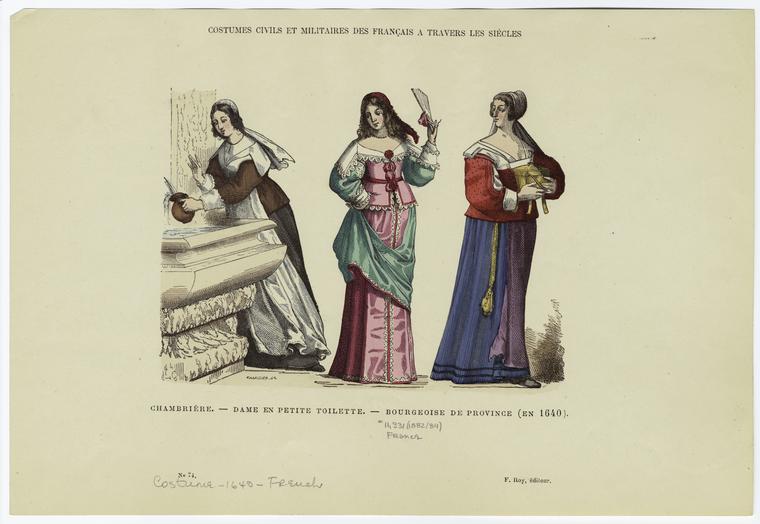 Sumptuary laws prevented most luxury items from appearing in the costume of the lower classes, so there would be little variation in the day to day clothing of simpler folk, especially since one tended to own no more than two of anything — two chemises (if you were wealthy enough), two underskirts (though usually only one), one pair of wooden clogs, maybe two pairs of stockings, linen drawers if you followed the fashion of Catherine di Medici (who brought underwear to France from Florence), etc. Washing of clothing was done little — the cloth not surving much heavy pounding against a wash board. Therefore, peasants wore sturdy aprons and washed only their underthings — also their nightshirt/nightdress — the better to preserve their outerwear.

The illustration below might have depicted a group on their way from market (note the basket with leafy vegetables). Several women in the image wear aprons and head covering (hoods or chaperons). Wealthy women could choose a Spanish crown, jewelry or a hairpiece to do the job (like the lady in blue). Underskirts are apparent on the lady in yellow

with the hand warmer and the bowtied bonnet. Her overdress wold have been an expensive article, kept only to impress and made of the best fabric she could afford. She and the blue-dressed lady both have detachable lace collars, which the gentleman also has on, as well as elaborate puffed sleeves, with the monsieur’s version open at the elbow to reveal his polished white chemise underneath.

It’s hard to believe but I can’t yet find examples of closed coats among the illustrations of costumery from the 17th century. Provence, the area of my novel, is in the mountains. There’s a lot of snow in winter and a vicious wind. From the art I’ve found, the one outergarment anyone seemed to wear was the cloak. It did have fur lining when one was able to procure an animal skin, but otherwise, I image people had to stuff their clothing full of straw. These figures below wear a short cape. They are in military costume of the period. Gentlemen were really into wigs by then and with each successing king Louis, false hair grew longer and longer. 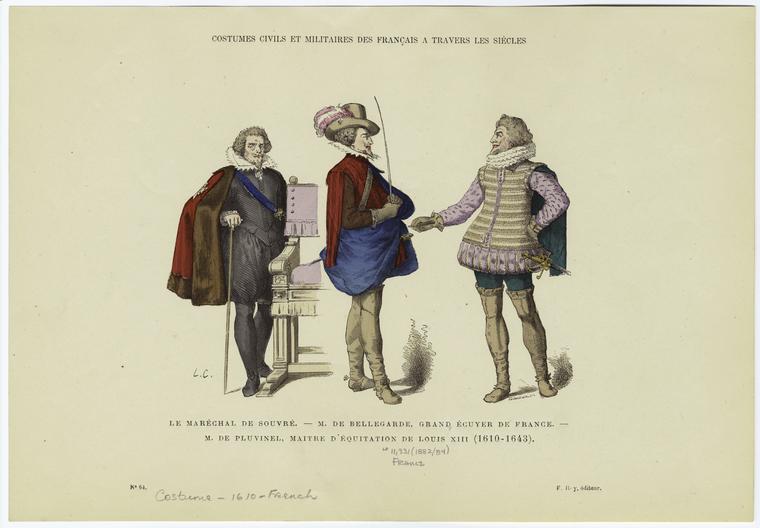 View all posts by fishysqua
Older Field Healing and Dry Stone Walls Newer The Renaissance Healer – a Brief Overview of the Evolution of the Female Medical Professional
Latest posts in the same category
photogaphy, Uncategorized